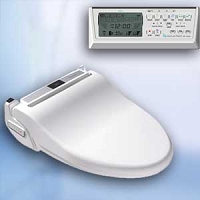 What Is A Bidet

What is a bidet? It sounds like be-day but is spelled bidet. The bidet has been around for about 300 hundred years. They first came into use in France somewhere near the late 17th century. The word bidet (sometimes misspelled bedit and bedet) is a old French word for Pony meaning to trot and the reason they called it that, was because you ride a pony kind of like you "ride" a bidet; go figure!

Most commonly a bidet works as a stand alone unit. They were developed in the early 19th century by Europeans and made out of porcelain. They kind of look like a toilet without a lid or seat with knobs to control the water. The idea behind the bidet sounded great and a lot of people put them in their bathrooms in the US. But I think they fell out of favor because they took up too much space and you had to get off the toilet, remove your lower clothing, squat down on cold porcelain in a uncomfortable way, clean yourself with cold water and have a towel handy; lots of work, but at least you were clean.

Now you know "what is a bidet".

The modern Bidet Toilet Seat (or as I like to call them a car wash for your butt) has a lot of functions depending on how much money you want to spend. They can be mounted to your existing toilet, replacing your current toilet seat and don't normally need extra plumbing to install them. They are very easy to install, but they do need a GFI protected electrical plug next to the toilet.

Most of them have an adjustable warm seat, front and back sprayer that you can adjust the temperature and pressure of the water and a soft close seat and lid as standard features. The water spray is a tight stream so it only gets you wet where you need it, no need for towels to dry yourself off like the stand-alone bidets.

The more expensive ones have more control of the sprayer wand, like a massage function (and no it does not touch you, but the water does), self-cleaning function, adjustable warm air dryer, self flushing (what will they think of next?), an air filter to remove the bad smell; (this one I really like) and a lid that opens and closes by itself; yikes!

They range in price from $139.00 to about $1,800.00. Bio Bidet, TOTO, Infinity, Blooming, INAX, Coway, Clean Sense, USPA and NOVA are priced from $299.00 to $1,020.00 or higher depending on where you buy them. I sell them at the lowest price possible and I also offering free shipping. In the end (no pun intended) they all do the same thing, but not all of them are created equal. Some have much better and more powerful nozzle spray heads, and a higher price does not always equate to a better nozzle system. The TOTO Washlet tends to be the most expensive bidet toilet seat. They also produce the Neorest that is a complete toilet integrated with a bidet, but it costs somewhere around $3,500.00 to $6,000.00. I think this one must sing to you and scratch your back!

So this is how they work. First, when you sit down on the toilet seat, it's warm; oooh aaah that feels sooo good. For safety the sprayer will not work unless you are sitting on the seat. After you have finished your business, there are two buttons, one for the front side (women) and one for the back side (for everyone). When you push the button, a wand will emerge from under the unit and spray warm water until you stop it or until you feel clean and fresh. Most of them cut off at 60 seconds, some at 120 seconds and you can restart the spray if you feel that you are not quite clean.

You can adjust the temperature and the pressure to fit your needs and like I said some of them have a massage function that will give you a more clean and invigorating experience.

Now all you have left to do is start the dryer and stop it when you're nice and dry and that's it. It really is that easy and you will kick yourself for not getting one before now.

Some people have a funny idea about bidets and I'm not sure why, because once you get over your hang ups about them and use one with an open mind, you will never go back to toilet paper again.

If you have someone in the house that you care for this will be a godsend for you. Or maybe you have a hard time reaching back there because of an injury or surgery. If you are having any health issues in this area, this will change your life. People with hemorrhoids, itching, bleeding, infections, female issues, after having a baby or surgery, this will be a lifesaver.

One more thing you will really appreciate about a bidet: When your system is out of whack and you have to make numerous trips to the bathroom, about the time when toilet paper starts to feel just like 80 grit sand paper; (OUCH, please don't remind me!) you will feel so much better using water than using toilet paper.

I hope this has helped you to know, "what is a bidet", how the bidet and bidet toilet seat works and hope you will consider buying from us when it's your time to make the change. I know you will just love having one, because everyone who has tried one will never go back to using toilet paper again.

If you still have unanswered questions use this Contact Us page or give me a call and I'll be happy to help you. When you do decide to buy one you will never go back to toilet paper again. If you like, please read My Bidet Story and find out why I started selling bidet toilet seats in the first place.

Cheers and to your health!